Luis Suarez is hoping an appeal will save him from missing the Copa del Rey final after being sent off for Barcelona in a bad-tempered semi-final, second leg against Atletico Madrid. 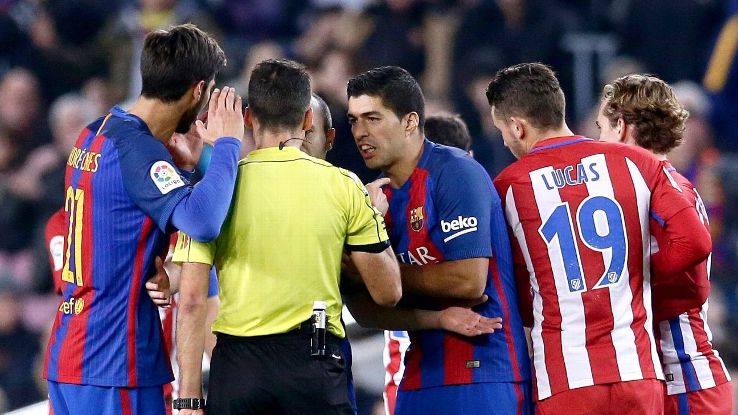 Suarez scored the vital goal as three players were dismissed in a 1-1 draw on Tuesday that secured the team’s place in a fourth straight final, Barca winning 3-2 on aggregate.

However, the Uruguayan – sent off for the first time in three years since his move to Spain – claimed a stray elbow on Koke as the game entered stoppage time was not even a foul.

“It makes me laugh because it was like he [the referee] wanted to do it,” Suarez told Gol Television.

“We need to see if we can appeal the second yellow because it isn’t even a foul, but we already know how these things go.

“That is why I am so angry because it was absolutely nothing. The first yellow was also for the first foul I committed in the game, but you could see it coming.”

Barca boss Luis Enrique is not holding out too much hope of having Suarez available for May’s final against either Alaves or Celta Vigo.

Enrique explained that you have to appeal what you believe is unjust but when you take a look at the precedents, you will probably see what normally happens with appeals.

Speaking further, he said that apart from the anger that a few of the players that will miss the final will feel, the most important thing is that Barca have won the match. He feels that Barca have achieved a lot by getting to the final and they have a great chance of winning the trophy.

Next up for Barcelona is a trip to Alaves on Saturday as they look to keep up the pressure on league leaders Real Madrid.